Natural Diamonds – Why Should You Care? 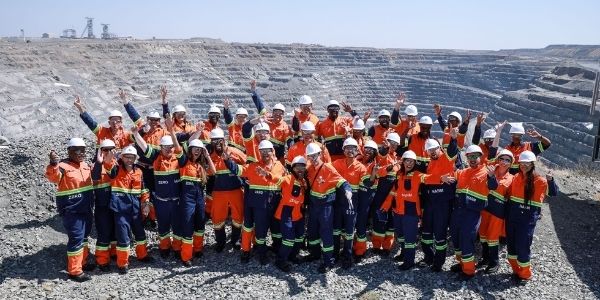 A Visit to De Beers’ Venetia Diamond Mine in South Africa

The diamond mining industry has been long regarded as one of the most prestigious resource mining operations, and for good reason. Such precious stones have been created by Mother Nature, over the course of millions of years, in a few locations worldwide. Much like other mining and precious resources industries, the diamond mining industry has evolved through time from the first discovery of diamonds in some of the more remote places on the planet, to the current massive and sophisticated operations that now produce most of the world’s diamonds.

‘Blood Diamonds’ – Challenging a Long-Held Misconception of the Diamond Industry

Edward Zwick’s 2007 movie ‘Blood Diamond’ has cemented itself in the minds of many, and highlighted the need for greater and stricter regulation of diamond mines internationally. However, such tighter regulation was in fact already put in place and developing just a few years prior to the movie’s release. This regulation is known as the ‘Kimberley Process’ which prevents the proceeds of diamond sales from funding conflicts, terrorism or unlawful trading in the international diamond market and calls for the ethical treatment of workers, and the responsible use of funds and exports to conduct the mining of this precious resource. Many diamond mines globally now adhere to and follow the Kimberley Process. Unfortunately, despite the significant progress made by the industry over the past decade, there is still a lingering and widespread misconception about mining operations in the diamond industry.  Recently, I have had the opportunity to visit the world’s largest diamond mining company, De Beers, in South Africa, which enabled me to experience firsthand an in-depth, behind-the-scenes insight into the mining process, operation and challenges faced by the industry.

A Rare Glimpse into Diamond Mining

In September 2019, De Beers opened its doors for the first time to the Venetia Diamond Mine to welcome 25 members of the Young Diamantaires* group; from over 10 countries. This was a group designed to represent the next generation of diamond industry members, founded by Mr. Rami Baron, Chairman of the Promotional Committee of the World Federation of Diamond Bourses (WFDB). The trip was also organized with great thanks to Mr. Ernest Blom, World President of the WFDB, Mr. Molefi Leftivski, Mr. Kealeboga Pule and Mr. Frank Auger. I was fortunate enough to be invited on this trip, and to learn first-hand, not only as a jeweller, but as an Exploration Geologist, about the mining operation and processing of rough diamonds at the mine site, and to experience conditions at the Venetia Mine. The colossal mine spans approximately 17.7 hectares, and contains two sections, an open-pit mine to a depth of 450 m, and an underground mine that spans nearly 1,000 m depth. The Venetia open pit mine opened in 1992, and provides the region with 4,365 jobs. It is South Africa’s largest diamond producer which produced 4.2 million carats in 2018. The underground portion of the mine has been deepened to a depth of 1,080 meters, extending the life of the mine until 2046, and producing a further 2,000 jobs in the process. This is no small operation, but what is not often discussed is the benefit that this scale of mining brings not only to local communities, but to the environment that it operates in and the development of the region. In light of the current trend towards synthetic stones and lab-created ‘diamonds’, there has never been a better time to discuss the key benefits of natural diamond mining.

The Unspoken Benefits of Natural Diamond Mining in South Africa

Perhaps not widely recognised is the major contribution large companies such as De Beers play in the role of education, healthcare, environment and employment in the communities and areas they are working in. While De Beers makes significant profits from diamond mining, major re-investment of capital back into local communities, the level of safety maintained at their mine sites and taking good environmental stewardship of the regions in which they operate is of paramount importance. De Beers promotes a strict policy of ‘Zero Harm’ with significant priority given to reducing Lost Time Injuries (LTI) at the Venetia mine site. De Beers were very forthcoming in sharing statistics and discussing incidents that have happened at the mine with full transparency. It was very apparent that employee safety is the company’s primary concern and taken extremely seriously. The mine site itself was clean and well-organized, with many safety measures in place to ensure safe and comfortable working conditions. One such example, was the installation of underground ‘rescue bays’, designed to rescue workers in the event of mine collapse or other major accidents where workers congregate in a secure area if trapped underground. We had the chance to speak openly with workers around the mine site who were on shift that day, and they were all too happy, allowing us to take photos and answer any questions that we had. Both women and men were working their shifts at the mine site wearing the appropriate safety gear and following procedure. The entire operation appeared well organised and managed with a strong emphasis on teamwork, following strict safety procedures while applying the ‘Zero Harm’ mindset to all tasks. Another key area that the company focusses on is the environment. One major example of this is when De Beers purchased 36,000 hectares surrounding the 17.7 hectares used for the Venetia Mine in order to create the Venetia Limpopo Nature Reserve (VLNR), which conserves and protects many native species, such as elephants, from harm and in particular poaching. Without the mine, this area would have been left as farming land excluding the protection and free range of many native species. De Beers is committed to preserving the natural landscape of South Africa, in that for every Baobab tree uprooted in the development of the Venetia Mine, the Baobab and its roots were preserved, and re-planted at the VLNR, in order to preserve the life of these iconic and important species. It is also important to note that one third of water used at the mine site is recycled for later use.

Investing In Their Future – Community Initiatives

In addition to providing thousands of jobs for local workers, the company has provided a multitude of benefits in terms of environmental and social benefits in the region. One such example is that De Beers has built 19 schools in the region to support the local community. The Limpopo region, where the mine is located, suffers from heavily over-enrolled schools, hence De Beers’ efforts in this area have been extremely important for young people. The company has also implemented the ‘De Beers Teacher Subvention Programme’ that provides the enhanced capacity for mathematics and science educators to work at schools. Such programs have been implemented at the Renaissance High School, Messina Primary, Eric Louw High School and Musina School. We were fortunate to visit the local Renaissance High School which revealed the extent of over-enrolment and an acknowledgement that there is still so much more to be done as the region expands. An important discussion was initiated by Mr. Baron, in which the participating Young Diamantaires members devised a plan to raise $140,000 USD to extend and upgrade the Renaissance Secondary School in the regional town of Musina in order to build a library and a commercial-grade cafeteria for the students studying at the school.  As an Exploration Geologist, I believe emphasis should be placed on working with secondary teachers to help develop a program for secondary students to learn about the Geosciences in order to provide them with a working background of how to responsibly explore for, mine and develop such precious resources.  These students are living in such a resource-rich country and such education would not only place them in a stronger position to understand the resources industry, but also enhance long-term job prospects. I will be exploring opportunities to volunteer at the end of my PhD studies to introduce more Geoscience education to secondary schools in this resource-rich region. Another very important area where De Beers makes an important contribution is its long-standing history of providing its employees with critical healthcare assistance. One such example is that as of 2019, nearly all of the company’s employees are aware of their HIV status and are fully medicated. In the last 10 years, there has been no HIV transmission between any mother employed by De Beers to her child which is a significant measure that demonstrates the company’s dedication to the healthcare of its employees.

The visit to the region also provided an opportunity to discuss initiatives to assist the growth and development of the Johannesburg-based diamond cutters. One initiative involves a pilot program of purchasing diamonds directly from the cutting and polishing manufacturers themselves in Johannesburg, as opposed to international intermediaries, in order to assist local business and to assist sales in the target countries. One final, but important fact is that De Beers has long-supported local women, with the Accelerating Women Owned Micro-Enterprises (AWOME) program. This program is designed to provide local women with micro-financed loans to start their own businesses and to create more jobs and administer business training in order to reduce the rate of unemployment, to reduce financial dependence and to build skills. Some such examples of these projects can be found at: https://www.debeersgroup.com/building-forever/standing-with-women-and-girls/encouraging-entrepreneurship. These are just some of the benefits that have come from natural diamond mining. As discussed, the impact of the Venetia Mine has had far-reaching benefits across the communities in the region. While I have not had the experience of visiting many different diamond mines internationally, the experience to me as a diamond dealer, geologist and jeweller was invaluable. The transparency of De Beers in allowing us to view their operations at the Venetia Mine and speak to their people was greatly appreciated and underscores the confidence they have in their operations. It is my hope that every company follows this example, and employs similar practices and transparencies in mining their own diamonds.

The natural diamond mining industry is currently facing challenges from the synthetic diamond industry, which produces laboratory-manufactured diamonds. The story told by many synthetic or lab-grown diamond traders is that their stones are ‘conflict-free’, and ‘eco-friendly’. Firstly, it is simply incorrect to assume and market that all natural Earth-mined diamonds are derived from conflict areas, and mined in unethical, un-regulated mines used to fund terrorism and conflict. Secondly, in order to create a synthetic, or lab-made diamond, extreme temperature and pressure and the use of petroleum-based chemicals is applied to a ‘seed’ crystal to produce a fully man-manufactured stone. This process consumes a large amount of energy and chemicals, which produces a large quantity of emissions, heat and waste, per stone in large factories. This can hardly be argued as totally ‘eco-friendly’ when we consider the scale of production, the size of the factories and the methods for production that creates a synthetic stone.

The problem for synthetic diamond manufacturers is that while synthetic stones are still priced at ~20-30% less than natural Earth-mined diamonds, they actually cannot hold their value on the international market, which is a problem for the consumer. Why? Because anything that can be created en-masse in a laboratory with lack of scarcity value implies that the product’s supply is virtually endless, hence no appreciation or retention of value can be maintained. Consumers need to be made aware of the facts that divide lab-made and natural stones, and need to make the choice to purchase something beautiful and unique created by over millions of years that appreciates in value, or to compromise with an inferior product that cannot foreseeably hold its value, and has no limit to its supply. It is, however, important and reasonable to ask your jeweller or wholesaler where their diamonds are sourced to ensure that their diamonds are derived from conflict-free regions and regulated mines.